Hey Homeschoolers! I Need Your Help...

A commenter over at GeekDad (where I am now one of two homeschooling mom contributors!) wanted to know if there were any geeky (science and tech oriented) homeschooling blogs. What are your favorites? Please comment!
Posted by Kathy Ceceri at 8:28 PM 3 comments: Links to this post

Taxidermy at the Pember Museum 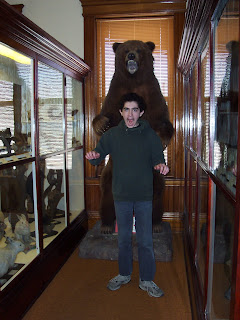 I've got a post up at GeekDad today about our trip earlier this week to the Pember Museum of Natural History in Granville, NY. It's a tiny one-room exhibit atop the public library, but I thought of its taxidermy collection when we were doing all that Darwin stuff. Links and more details at GeekDad.
Posted by Kathy Ceceri at 8:50 AM 1 comment: Links to this post We researched some more questions about mushrooms:

#1 – How long can a mushroom live?
, Wikipedia.com

#2 – What are the symptoms of being poisoned by a mushroom?
Source-Wikipedia.com

Poisonous mushrooms contain a variety of different toxins that can differ markedly in toxicity. Symptoms of mushroom poisoning may vary from gastric upset to life-threatening organ failure resulting in death. Serious symptoms do not always occur immediately after eating; often not until the toxin attacks the kidney or liver, sometimes days or weeks later.
The most common consequence of mushroom poisoning is simply gastric upset. Most "poisonous" mushrooms contain gastrointestinal irritants which cause vomiting and diarrhea (sometimes requiring hospitalization), but no long-term damage. However, there are a number of recognized mushroom toxins with specific, and sometimes deadly, effects.

#3 – How many types of mushrooms are poisonous?

Of the many thousands of mushroom species in the world, only 32 have been associated with fatalities, and an additional 52 have been identified as containing significant toxins. This picture of hydroponic veggies in a fish tank is from the Homeschooled Twins blog. The family took a behind the scenes tour of a ride at Disney World in Florida called Living with the Land. Looks like a lot of fun!
Posted by Kathy Ceceri at 7:39 PM 1 comment: Links to this post 
How can I tell which wild mushrooms are poisonous?

Contrary to popular belief, there is really no discerning characteristic that all poisonous mushrooms share. Since only about 5% of wild mushrooms are edible, I wouldn’t recommend eating a wild mushroom unless you are a hundred percent sure that it isn’t poisonous. What is the life cycle of a mushroom?

(From ArticleClick.com)
Most mushrooms reproduce asexually by releasing thousands of spores through their gills into the open air for dispersion into the environment. Every spore is capable of germinating to create a new hypha. Hyphae are masses of intertwined filaments of cells which are the morphological unit of the fungus. When a thick mass of hyphae forms it is called mycelium or mycelia. Mushroom mycelium is usually white in color with a rough, cottony texture. Root like growth is called rhizomorphic.

When spores germinate they consume the water and nutrients from their environment and begin to reproduce. The medium that mushroom mycelium grows on is usually called substrate. Before the mushroom can start to form fruit bodies the mycelium colonizes the substrate fully and when the environmental conditions are right the mushroom emerges to produce more spores. The mushrooms after we harvested them.
What different kinds of mushrooms are native to what areas? 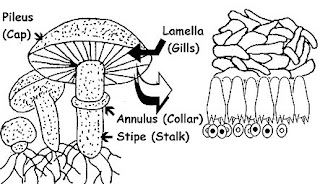 Posted by Kathy Ceceri at 8:37 AM 3 comments: Links to this post