Why Everyone Should Learn the Theory of Evolution 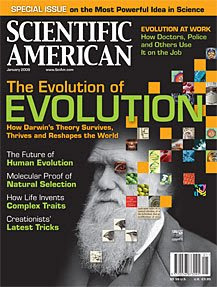 An opinion piece in the January 2009 issue of Scientific American focusing on "The Evolution of Evolution" has this to say about Darwin:

Darwin’s genius—and, yes, genius is the right word—is manifest in the way his theory of evolution can tie together disparate biological facts into a single unifying framework. Evolutionary geneticist Theodosius Dobzhansky’s oft-cited quotation bears repeating here: “Nothing in biology makes sense, except in the light of evolution.”

Read the rest of SciAm's features -- including Testing Natural Selection with Genetics, Putting Evolution to Use in the Everyday World, and The Latest Face of Creationism in the Classroom -- here.
Posted by Kathy Ceceri at 7:07 PM

Thank you so much for posting this. Evolution is a completely accepted fact in Europe except for a very small minority. I have been very surprised to read on the internet so many Americans who question geological and biological facts. I grew up believing the US led the world in science and research. The world needs the US to lead the way in such important issues such as climate change (which also is accepted as fact here in Europe) .

I meant to add in these links for you on evolution. They are from the BBC 'In our Time' radio programme. The pages have a 'listen again' feature which has three professors and a presenter discussing the topic. There are alos further reading sections. I hope you enjoy them!
Human Evolution:
http://www.bbc.co.uk/radio4/history/inourtime/inourtime_20060216.shtml

The Origins of Life:
http://www.bbc.co.uk/radio4/history/inourtime/inourtime_20040923.shtml

Here is the index in case you would like to hear some other programmes:
http://www.bbc.co.uk/radio4/history/inourtime/inourtime_archive_home.shtml

Thanks, Lorna! Yes, it is embarrassing that America is so far behind the rest of the world about evolution, global warming, and other scientific issues. Heck, we don't even use the metric system!

I'm thinking of getting a hardcopy of the Scientific American and using it as the basis of a unit on Darwin in the new year. I'll check out those links too.

Here is a fantastic book on Darwin and Evolution: Darwin and Evolution for Kids By Krtistin Larson. It's a biography of Darwin (a born homeschooler in spite of his father) including discussion about the mind set of his time, enough science to help make points clear and science activities as well...a must and if I could find it again, I'd buy it. The copy we had was from the New Zealand library and completely vanished when I went back to get it out again.

Thanks for reminding me about this book! I had it out before but didn't get to it. Time to take it out again.